Created in dialogue with work by Laura Grace Ford

This work was created in response to Laura Grace Ford’s Trinity to St Marys, an installation and billboard based on a ‘drift’ from Trinity Shopping Centre to St Marys Street in Leeds. Two bodies of sound material formed the basis for an fifty minute improvisation that responded to Laura’s palimpsestic and phenomenological narrative of her path through the city: a series of ambisonic field recordings guide the work and retrace the footsteps of Ford’s drift, collecting the shifting temporalities and dynamics and mapping the thresholds of the rapidly changing city centre. These sound spaces are held in tension with a second series of recordings made inside the gallery space where the unique acoustic voice of each room is is heard to resound sympathetically with the vibrations from the incessant traffic of the neighbouring York road. 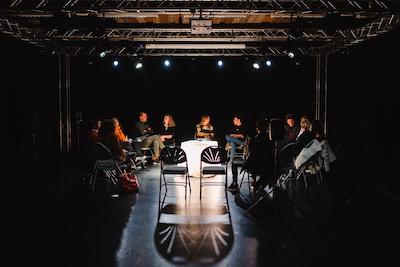